The fastest runner in baseball is someone fans may not expect.

His name is not in lights.

Based on the 2019 season, the Arizona Diamondbacks outfielder covers 30.8 feet in one second on the stopwatch.

Many others are nipping at Locastro’s heels. Shortstop Trea Turner of the World Series champion Washington Nationals is second at 30.4 feet per second and Minnesota Twins outfielder Byron Buxton is third at 30.3 feet per second.

A player’s sprint speed is defined as “feet per second in the player’s fastest one-second window” in a given play. It is based primarily on full speed runs from home to first on ground balls, and going two bases at a time on a single hit.

Radio and television announcers now frequently refer to it, with the info seemingly at their fingertips.

While Locastro is the fastest individual, leftfielders represent the fastest position — 29.8. Then come shortstops and centerfielders.

The slowest defensive spot is first base (28.6) followed by catchers (28.8). Pitchers are not included in this statistic.

In parts of four big-league seasons with the Dodgers and Diamondbacks, Locastro is 22-for-22 in stolen bases. In the minor leagues, he swiped 171 bases while being caught 39 times.

The Twins’ Buxton is the fastest American Leaguer and perhaps the game’s elite centerfielder. He won the 2017 Golden Glove.

Buxton, aka the “Buxton Burner,” made his big-league debut in 2015. He had a streak of 33 straight stolen bases at one point in his career and is 60 for 68 overall.

Philadelphia’s Roman Quinn, the fifth fastest overall, was ranked “fastest prospect in the country” by Baseball America as a Florida high school player in 2011.

For decades, “baseball speed” was based on the 60-yard dash, with anything under 6.6 seconds being exceptional. The 60-yard dash is still commonly used at try-out camps and talent combines.

The “feet per second” is perhaps a metric more specific to a sport all about short bursts of energy.

MLB’s Statcast Savant rates the runners all the way down to 568nd place for 2019.

In terms of track and field speed, the fleetest MLB player of all-time was likely Herb Washington, who served as a pinch runner for the Oakland Athletics in 1974 and 1975.

A former NCAA sprint champion at Michigan State University, Washington at one time held the world record for the 60-yard dash at 5.8 seconds.

Washington was exclusively a pinch runner for the A’s, stealing 31 bases in 48 tries. He never batted or played in the field.

Former 1960s Los Angeles Dodgers centerfielder Willie Davis is another player who took track and field talent to the diamond. Davis was timed at 9.5 seconds for the 100-yard dash at Roosevelt High School in Los Angeles and set a city record for the long jump at 25-5.

While he has struggled with the bat, Hamilton has stolen 299 bases in 368 attempts.

No story of baseball speed is complete without mention of James “Cool Papa” Bell from the Negro Leagues. The

switch hitting outfielder once stole 175 bases in a season, was an eight-time All-Star and was named to the Baseball Hall of Fame in 1974.

Teammate Josh Gibson famously said this of his Homestead Grays teammate and roommate: “Cool Papa was so fast he could turn out the lights and get back in bed, under the covers, before the room got dark,” Gibson insisted.

Eyewitness accounts may not be as scientific as modern day metrics, but they’re surely more entertaining. 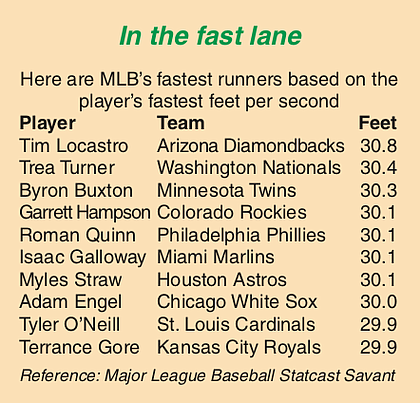