At the time of writing, Bitcoin seemed to have briefly reclaimed the $11,500-mark, before dipping into the mid-$11,400’s, again. The world’s largest cryptocurrency showed some bullish signals on the charts, however, and could reclaim $11,800 if buyers seize control. Similarly, IOTA appeared to have broken out of its downtrend and looked ready to initiate an uptrend of its own in the coming hours.

DASH was also consolidating, and its next move might dictate its price trend over the next few days and answer the question of whether it will continue to the downside or will note a short-term reversal upwards. 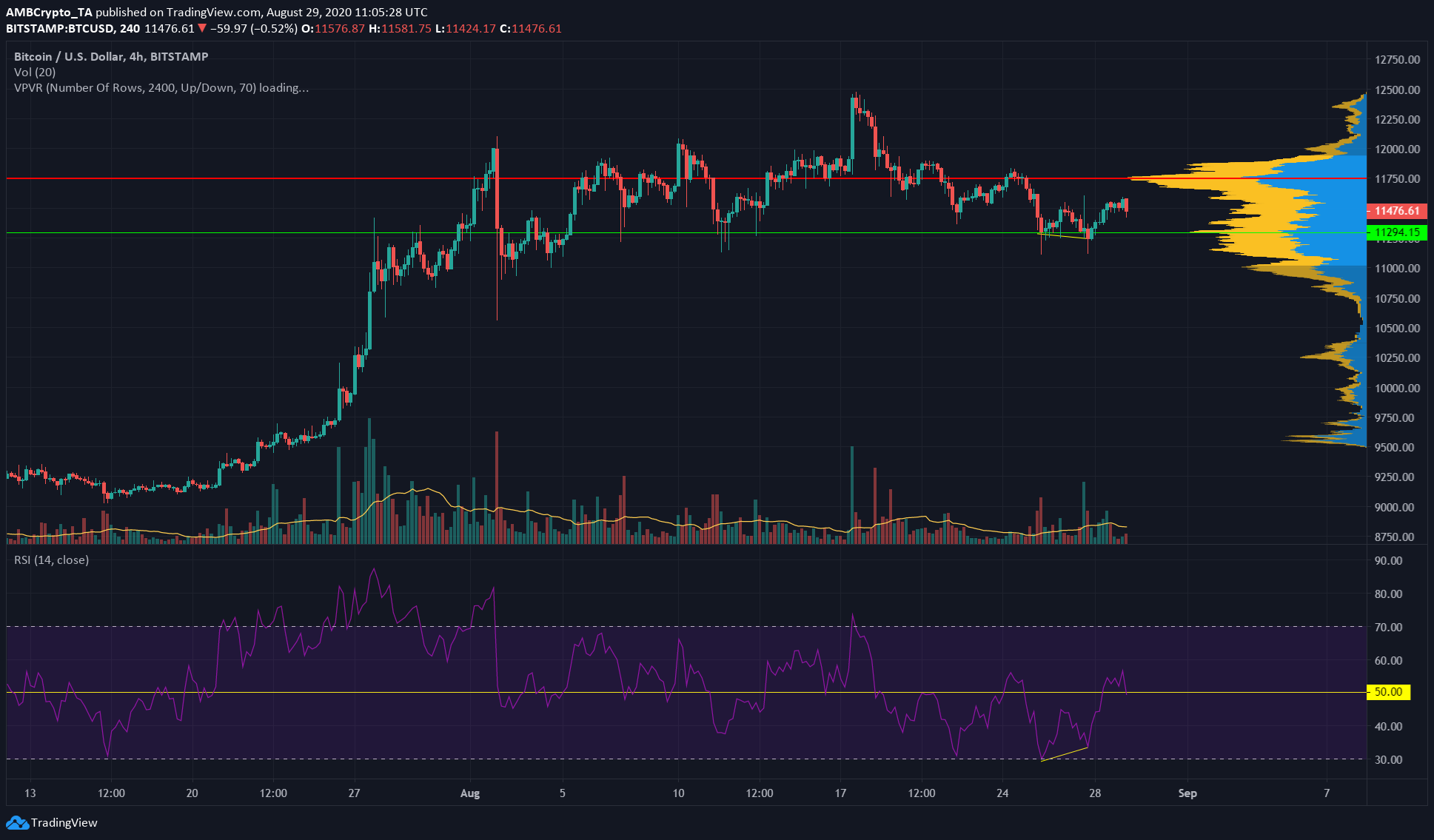 Bitcoin had its Point of Control at $11,748, highlighted by the VPVR. In fact, the $11,800-mark has also been a zone that Bitcoin has traded in for quite a while.

Bitcoin, at press time, was noting a bullish divergence on the charts, with its price making lower lows while the RSI showed higher lows. Subsequently, over the past 24-28 hours, BTC did rise from $11,300 to nearly $11,540.

This price appreciation was backed by above-average trading volume. However, since then, the price has been somewhat stationary. The RSI broke above the neutral line, before settling at 49, at press time. It is possible that the RSI might manage to bounce upwards from the level since the session had not yet closed, at press time. That would be an encouraging signal for Bitcoin’s bulls.

Recently, reports surfaced of 280 addresses being forfeited by the U.S Department of Justice for the addresses’ connection to laundering $28.7 million worth of stolen cryptocurrencies by the Lazarus Group.

IOTA was noting a strong downtrend on its charts, losing nearly 30% of its value in less than 10 days. However, it could be showing signs of trend reversal soon.

After testing its support at $0.3225, IOTA rose sharply and above the trendline (yellow) of the preceding downtrend. IOTA also reclaimed $0.35, strengthening the case for a trend reversal.

The trendline (yellow) on the On Balance Volume Indicator had not yet been broken, although it registered a higher low rather than a previous low. If IOTA surges with good trading volume and the OBV trendline is breached, a short-term uptrend could be initiated.

In recent news, IOTA developer Hugo Gregerson showed users how IOTA protocol can be integrated with Amazon Alexa, allowing users to check their balance on the Trinity wallet.

DASH dipped below its support at $84.21, but did not tarry there long as buyers drove its price above the support level to $85. However, DASH, at the time of writing, was still in a downtrend, as it has been for the better part of August.

The Bollinger bands indicated that DASH’s volatility could be falling significantly. This squeeze could contribute to DASH consolidating for a few hours, or even a few days, around the $85-mark. If the immediate support is lost, the next zone of support for DASH would be at $79.

Whether DASH approaches the upper Bollinger Bands or lower will indicate the direction of its next price movement after constriction of the bands. That move will be very crucial, especially if it happens accompanied by above average volume.