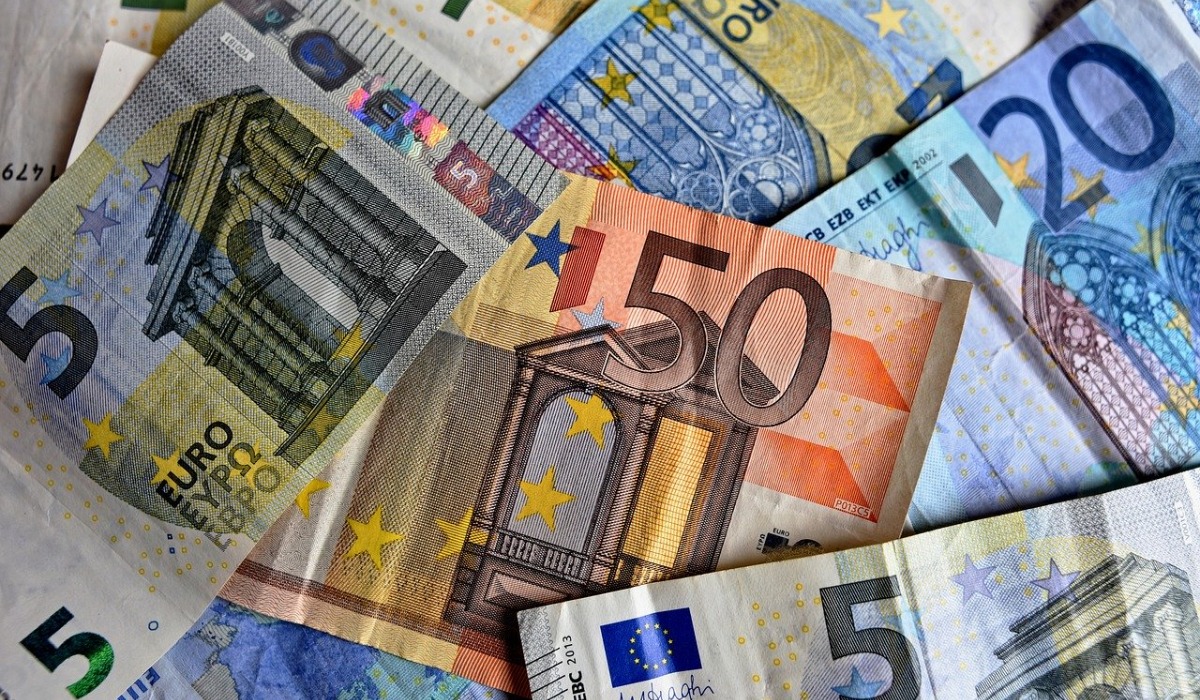 The “Dash for Dollar Cash” has seen the euro to dollar exchange rate drop 4% last week as the market focused on the ultimate safe-haven currency.

“The fast-evolving economic shock of Covid-19 has quickly become a financial market shock. 30% falls in equity markets and eye-watering levels of volatility have prompted massive deleveraging across all asset classes, including commodities and debt markets. There has been a dash for dollar cash. Strains in the USD funding market have been a key driver of this dollar strength. The Fed and the US Treasury are doing their best to address these (targeting the CP market). It may take several weeks to restore confidence in this sector. We think the $ will hand back some of its recent gains once the dust settles and the flood of $ liquidity goes through the system.”

“Prices have developed into a choppy range over 1.0630 support, while oversold studies attempt to unwind. A rally through 1.0800-1.0935 resistance is needed to suggest a broader recovery can develop, with 1.1020-1.1090 important levels above there. For now, the greater risk remains that prices just consolidate sideways before another test down towards the previous 1.0340 lows from 2017.

“EUR/USD short-term technicals are neutral – The EUR’s slight climb for the session off its lowest point since April 2017 was cut short at around 1.0800 as the currency continues to face downward pressure, albeit for the moment resisting a dip into ‘oversold’ territory (RSI). While technical studies may suggest that the EUR is not oversold, the common currency’s steep decline in the last two weeks is bound to find a floor soon as its losses become stretched. Support markers are few and far in between, however, with only the vicinity of the 1.0500 mark likely to cap another downswing after immediate support at 1.0650/60. Resistance is ~1.0800. “

“EUR/USD exchange rate forecasts are Q2 2020: 1.11 and Q4 2020: 1.14. Looking past the current funding crunch, the USD should go back on the defensive as markets become more in sync with Fed measures taken over the past few weeks. Longerdated spreads to EUR rates have narrowed considerably, which suggests that EUR/USD dips will likely be bought into once the current fear around the virus dissipates. Both the EU and US are expected to fall into recession, though effect of fiscal multiplier is likely stronger for the EUR. Longer-term, USD headwinds such as diversification will continue to work against the USD and simultaneously favour the euro.”

“We see EUR/USD heading lower still in the near term, as broad USD strength is set to continue to reign, as discussed above. This is especially so if the ECB efforts fail to contain European stress and/or Fed initiatives manage to fade USD funding stress. More broadly, it is no longer a question of whether or not the USD is a safe haven when things get bad enough – and we have no reasons to expect risk sentiment will improve markedly for the short term. We target the cross to hit 1.05. Longer term, the outlook is exceptionally blurred at present but notably we do not expect the USD to significantly lose strength against the EUR. Despite extreme fiscal and monetary policy action across countries, we deem that it will be hard to find renewed confidence in the EUR given the institutional set-up in general and the German reluctance to use fiscal easing specifically. As a result, we expect EUR/USD to linger in the 1.07 area for an extended period of time. A key upside risk to the cross would be massive fiscal expansion by the US – as it stands, a third extensive US virus package could be 2-6% of GDP – though this is facing significant obstacles in the making. Thus, we revise our 1M forecast to 1.05 in anticipation of further market stress and see the cross trading around 1.07 throughout the 3M, 6M and 12M horizon.”

“For our readers, the main question is whether the US dollar will retain its safe haven bid and extend higher in the coming week and our answer is yes its possible as long as there’s no intervention. From a monetary policy perspective, the Federal Reserve is running out of options so we don’t see any big bazooka announcements next week that could threaten the dollar’s rally. They’ve already taken interest rates to zero, restarted QE and provided support for money market funds. President Trump’s fiscal stimulus package could move through Congress quickly and the progress could lift the dollar. There’s also very little market moving data on the calendar that could hurt the greenback. The main numbers to focus on will be durable goods, revisions to GDP and revisions to the University of Michigan Consumer Sentiment index.

“The main risk for the dollar is G7 currency intervention. With the rise in the greenback driving many currencies to multi-year lows, central banks from Brazil to Norway have rushed to prevent further losses. There’s a very good chance that coordinated action on a global scale will be next. If they come into the market, it will be to sell dollars, not buy them. Individual central bank interventions rarely have a lasting impact on currencies but shock and awe moves could temper the rise and calm equity markets.”

“From my point of view, we are gradually reaching a point where the dollar’s sharp upward trend may be coming to a halt. Markets have been flooded with liquidity for days, while further FX interventions, if necessary, are becoming increasingly probable. Global central banks are clearly trying to calm the FX markets. This may potentially weaken the aggressively growing demand for the USD somewhat.”

“Euro/dollar bounced in Asian/early European trade today as US dollar funding pressures seemed to ease temporarily once again. The widely followed 3-month EURUSD cross currency basis swap (CCBS) reached a high of +1bp in overnight trade versus -46bp yesterday afternoon and -97.5bp at yesterdays NY open. This mornings swift upside rejection of the 1.08 handle should be concerning for the EURUSD bottom pickers, because it keeps the markets downtrend momentum intact. We think the 1.0690 to 1.0790-1.0820 range will be pivotal for EURUSD heading into next week.”

“EUR has seen its share of volatility in recent days. Compared to other G10 currencies, however, it has been rather well-behaved. That may be starting to change. Spot has now pushed below the 20 February lows at 1.0778. If sustained, this is the clear break lower we have been looking for. Given the high degree of intraday volatility, we would like to see a weekly close below 1.0770 before drawing too many conclusions. We do suspect, however, we are transitioning into a new, lower trading range. Our immediate focus now shifts to a test of 1.0570, although we note the early-2017 lows at 1.0341 could also come into view.”

“Once more yesterday, we saw an initial stabilization of dollar during the Asian session resulting in a massive acceleration lower once the Europeans took hold. A huge bear candle with the market eyeing a full retracement back to $1.0775. For that reason, we need to view this morning’s early bounce as the European session approaches, with caution. On the daily chart, momentum of the move continues to extend lower, whilst also showing downside potential (especially on RSI and Stochastics), in addition to a recent bear cross on MACD. In the past month, the RSI has gone from being the most oversold (c. 21) since March 2018 (on the low at $1.0775) to the most overbought (c. 81) since 2008. Once more it is accelerating lower and there is little reason for 30 to limit moves right now. Yesterday’s low at $1.0800 is initial support, but intraday rallies continue to be sold into. The 76.4% Fibonacci retracement (of $1.0775/$1.1492) at $1.0945 is an initial basis of resistance, with the recent reaction low at $1.0955 adding to initial overhead supply. A close above $1.0950 would be a start for the bulls, but ideally a move above $1.1050 would come in a series of positive closes, not just one spike.”

The Euro US Dollar (EUR/USD) exchange rate fell last week with the pairing reaching highs of $1.12 and lows of $1.06 as the European Union grappled with the coronavirus pandemic and placed the Euro area under lock-down.

With the German economy teetering on the brink of recession, this left many single currency traders concerned for the bloc’s overall economic health going forward. However, the European Central Bank (ECB) stepped-up stimulus measures to bolster the economy throughout the Covid-19 crisis.

This arrived in the form of a huge emergency €750bn stimulus package to strengthen the Eurozone.

Catherine Lagarde, the President of the ECB, tweeted:

‘Extraordinary times require extraordinary action. There are no limits to our commitment to the euro. We are determined to use the full potential of our tools, within our mandate.’

However, with much of the Euro-area under lock-down this failed to provide much uplift for the EUR/USD exchange rate. Instead the single currency battled against a sell-off in favour of the safe-haven US Dollar.

The Euro (EUR) clawed back some of its losses towards the end of the week as global markets began to stabilise, initiating a sell-off of the ‘Greenback’ in favour of risker assets.

The EUR/USD began to edge higher on rebounding oil prices and signs of economic stabilisation after the world’s central banks wrestled with the crisis.

The US Dollar (USD) started last week steady against the EUR (EUR) after Sunday saw the US Federal Reserve slash its interest rates from 1.25% to 0.25%.

‘The Federal Reserve on Sunday slashed rates to zero and launched a new bond purchase program. Other central banks have taken similar measures but the moves have so far failed to stem liquidity strains and market panic.’

‘Central banks have also cut pricing on their swap lines to make it easier to provide dollars to financial institutions around the world.’

Last week saw the US Dollar soar on an intense demand for its safe-haven refuge as emerging market currencies and risker assets suffered from global economic uncertainty.

Thursday saw Senate Republicans roll out a $1 trillion economic stimulus plan which aims to deliver critical aid to US businesses and the wider economy.

This followed the Federal Reserve’s announcement of an additional $450bn in US Dollar swap lines, which cooled fears of a shortage of ‘Greenback’.

The US Dollar (USD) closed the week slightly down after the US jobless claims indicated a sharp surge in unemployment since Covid-19 took hold.

Euro (EUR) investors will be paying close attention to the German and Eurozone PMI reports for March next week. Any indications that the German economy – which is the largest in the Eurozone – could be heading for a recession would prove EUR-negative.

US Dollar (USD) traders will be awaiting Wednesday’s US Durable Goods orders report for February. If this picks up, we could see the ‘Greenback’ edge higher as its economy continued to show areas of strength before the coronavirus took hold.

US jobs data will also remain in focus. Any further signs of unemployment would weaken the appeal of USD as its economic outlook would begin to darken.

The Euro (EUR) could begin to weaken next week if the EU’s lock-down threatens to stifle the bloc’s economy. However, if the ECB steps up with more stimulus measures, we could see the single currency begin to stabilise.

The EUR/USD exchange rate will remain sensitive to coronavirus developments next week. If the global economy begins to teeter towards collapse, we could see a sell-off of the single currency in favour of the safe-haven US Dollar.

Save money on your currency transfers with TorFX, voted International Money Transfer Provider of the Year 2016, 2017 and 2018. Their goal is to connect clients with ultra competitive exchange rates and a uniquely dedicated service whether they choose to trade online or over the telephone.
Find out more here.