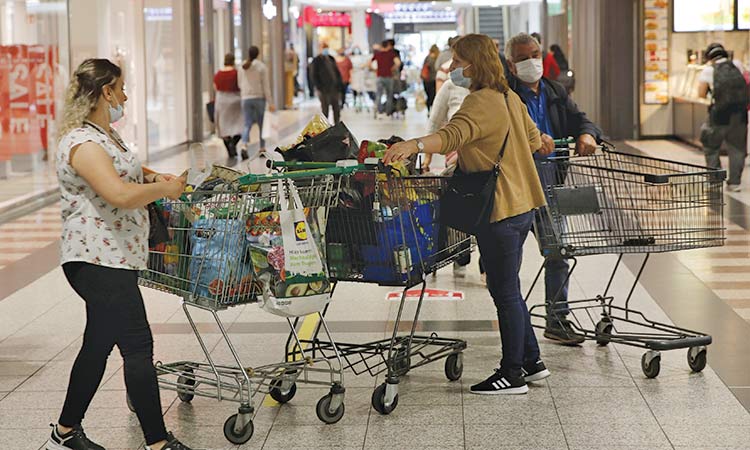 Customers at a shopping mall after easing of the lockdown in Weil am Rhein, Germany. Reuters

German retail sales fell unexpectedly in July, data showed on Wednesday, dashing hopes that household spending in Europe’s largest economy can drive a strong recovery in the third quarter from the coronavirus shock.

Germany expects the economic devastation caused by the COVID-19 pandemic to be less severe this year than originally feared, but sluggish foreign demand is likely to weaken the rebound in Europe’s largest economy next year.

Chancellor Angela Merkel’s government has since March unleashed an array of rescue and stimulus measures, financed with record borrowing of 217.8 billion euros, to help companies and consumers get out of the crisis.

The stimulus package includes a temporary cut in value-added tax (VAT) from July 1 until December 31, worth up to 20 billion euros, to give domestic demand an additional push.

But the retail sales figures released by the Federal Statistics Office cast some doubt on whether the measure is working. Some companies are not passing on the tax cut to consumers and shoppers generally seem to be holding back.

Retail sales were down by 0.9% on the month in real terms in July after a revised drop of 1.9% in June and a 13.2% jump in May, when authorities eased lockdown measures.

This missed a Reuters forecast for a 0.5% increase, though retail sales are a volatile indicator often subject to revision.

“The disappointment among German retailers is likely to have been great: The VAT cut on July 1 did not lead to the hoped-for increase in sales, at least in the first month,” DZ bank economist Michael Holstein said.

But Holstein warned that it was too early to write off the tax cut as ineffective – it could still help in the coming months.

The retail picture was a bit brighter over the past 12 months. On the year, retail sales rose by 4.2% in real terms after an upwardly revised increase of 6.7% the previous month, the data showed.

Compared with February, the month before the outbreak of the pandemic, retail sales were 0.9% higher in real terms in July, the office said, suggesting they managed to recover relatively quickly.

In the first seven months of the year, retailers increased their sales by 2.6% in real terms despite the crisis.

The data revealed huge gaps within the sector. Sales in shops selling textiles, clothes, shoes and leather goods collapsed by more than a quarter in the January-July period. Online retailers increased their sales by a fifth.

The German economy contracted by a record 9.7% in the second quarter as household spending, company investment and trade all collapsed at the height of the COVID-19 pandemic.

The government revised upwards its 2020 forecast for the economy to shrink by 5.8% this year from a previous estimate of -6.3%. That would still represent the biggest economic slump since World War Two.

Presenting the government’s updated forecasts on Tuesday, Economy Minister Peter Altmaier said a strong response from the state was helping fuel a quicker than expected recovery from the coronavirus shock.

“The recession in the first half of the year turned out to be less severe than we had feared,” Altmaier told reporters, adding that the worst was over for the economy.

“Overall, we can say that at least for now, we are dealing with a V-shaped development,” Altmaier said. He added that he did not expect authorities to impose another round of lockdown measures as in March and April.

Confirming an earlier Reuters report, Altmaier said Berlin had revised upwards its 2020 forecast to a decline of 5.8% from a previous estimate of -6.3%.

That would still represent the biggest economic slump since World War Two. The German economy contracted by 5.7% in 2009 as the global financial crisis unfolded.

For 2021, the government revised downward its growth forecast to an expansion of 4.4% from its previous estimate of 5.2%. This means the economy will not reach its pre-pandemic size before early 2022, Altmaier said.

The revised forecasts will form the basis of tax revenue estimates, which the finance ministry is expected to update next week. This will be followed by Finance Minister Olaf Scholz’s proposal for the federal government’s budget in 2021.

Scholz has already said he will ask parliament to suspend constitutionally enshrined debt limits next year so that the government can plan its 2021 budget with new debt as it sees necessary.

Germany’s Bundestag lower house of parliament suspended the debt brake in March and June to allow the government to borrow an additional 217.8 billion euros this year.

The government has launched an unprecedented array of rescue and stimulus measures since March to shield companies and consumers from the initial impact of the pandemic and help them recover as quickly as possible.

The economy contracted by a record 9.7% in the second quarter as consumer spending, company investment and exports all collapsed.

Germany fared better than some other eurozone economies, however. The French economy contracted by 13.8% quarter-on-quarter in the April-June period and Italy’s shrank by 12.8%.

The German central bank expects household spending to drive a strong recovery in the third quarter, helped by stimulus measures including a temporary cut in value-added tax. The Ifo economic institute predicts the economy will rebound with a quarterly growth rate of some 7% in July-September.

The Question That ‘Mulan’ Doesn’t Ask