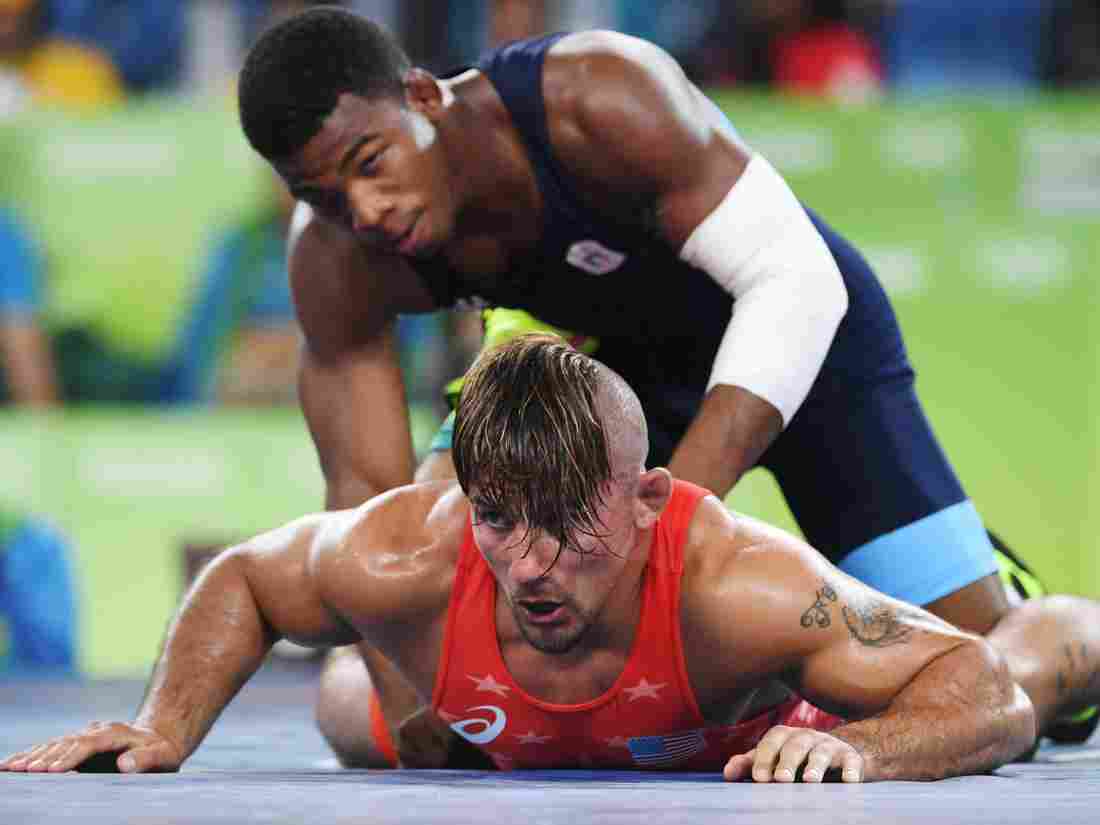 U.S. wrestler Frank Molinaro (red) battles Italy’s Frank Chamizo Marquez in the 65-kg (143 pound) bronze medal bout at the 2016 Summer Olympics in Rio de Janiero. Molinaro, who lost to Marquez, recently retired from the sport when the 2020 Olympics were postponed for a year because of the coronavirus outbreak.

The Summer Olympics in Tokyo were supposed to start Friday.

The Games were, of course, postponed until next July because of the coronavirus outbreak. It forced thousands of athletes to pause and re-order their training schedules.

But some decided a year was too long to wait.

And now those athletes share a bond with U.S. Olympians 40 years ago. Their dreams also ended because of factors they couldn’t control, when the U.S. boycotted the 1980 Moscow Summer Olympics after the Soviet Union invaded Afghanistan.

That’s when the compact, muscular Molinaro won the U.S. Olympic Trials in the 143-lb weight class, and almost won a bronze medal at the Summer Games in Rio de Janiero.

He believed 2020 would have been better.

“I had a clear mind and a light heart and I was in a state of zen. And, I just felt like my tactics and my techniques and moves were crisper and, y’know, just sharper than they’ve ever been.

“When you get [to the Olympics],” he said, “it’s like everybody’s an unbelievable athlete and you only have one or two days to be at your best. So some of it is timing and luck and destiny and faith. [But] I knew just being there … it [would’ve been] my second time there … I think I was definitely going to place to be honest.”

But going for bust, as he puts it, ended amidst a pandemic and postponement.

For the father of three young boys, another year of preparing was daunting.

“Y’know [it meant] committing to another seven, 800 workouts,” Molinaro said, “the weight management, the stress on my family.”

After announcing his retirement, he was offered a job coaching college wrestling. He took it, and it helped take off some of the sting of ending a long competitive career without an Olympic medal.

“You try to plan,” Molinaro said, “four years ahead, y’know, and sometimes you try to plan 10 years ahead and there’s really no guarantee for your next breath. [Or]the next day. Things can get turned upside down.”

The Olympics in sight and then vanished

Forty years ago, Craig Beardsley was locked in to his plan.

As a freshman at the University of Florida, Beardsley finished second at the NCAA Championships in the 200 meter butterfly. In 1979, a year before the Moscow Summer Olympics, he won a gold medal at the prestigious Pan American games.

He was a rising star, with Moscow in his sights.

“My focus was myopic, my world was insular,” Beardsley said.

But soon enough, the larger world forced its way in.

In late December of 1979, the then Soviet Union invaded neighboring Afghanistan. It was the first Soviet invasion of a country outside the Eastern Bloc, since World War II. U.S. President Jimmy Carter responded with talk of an Olympic boycott. Pulling American athletes from a global event the Soviets were bound to use as a propaganda tool.

In a 2014 Politico Magazine article adapted from his book “Dropping the Torch: Jimmy Carter, the Olympic Boycott, and the Cold War,” author Nicholas Evan Sarantakes writes a boycott was popular; 55 percent of the American people supported the idea.

“But Olympians fervently opposed it,” Sarantakes wrote. “Any boycott isn’t going to change the Soviets’ mind and isn’t going to get troops out of Afghanistan,” complained Julian Roosevelt, an American member of the International Olympic Committee. “I’m as patriotic as the next guy, but the patriotic thing to do is for us to send a team over there and whip their ass.” Al Oerter, a four-time gold medalist in the discus who was trying to make a comeback at age 42, agreed: “The only way to compete against Moscow is to stuff it down their throats in their own backyard.” 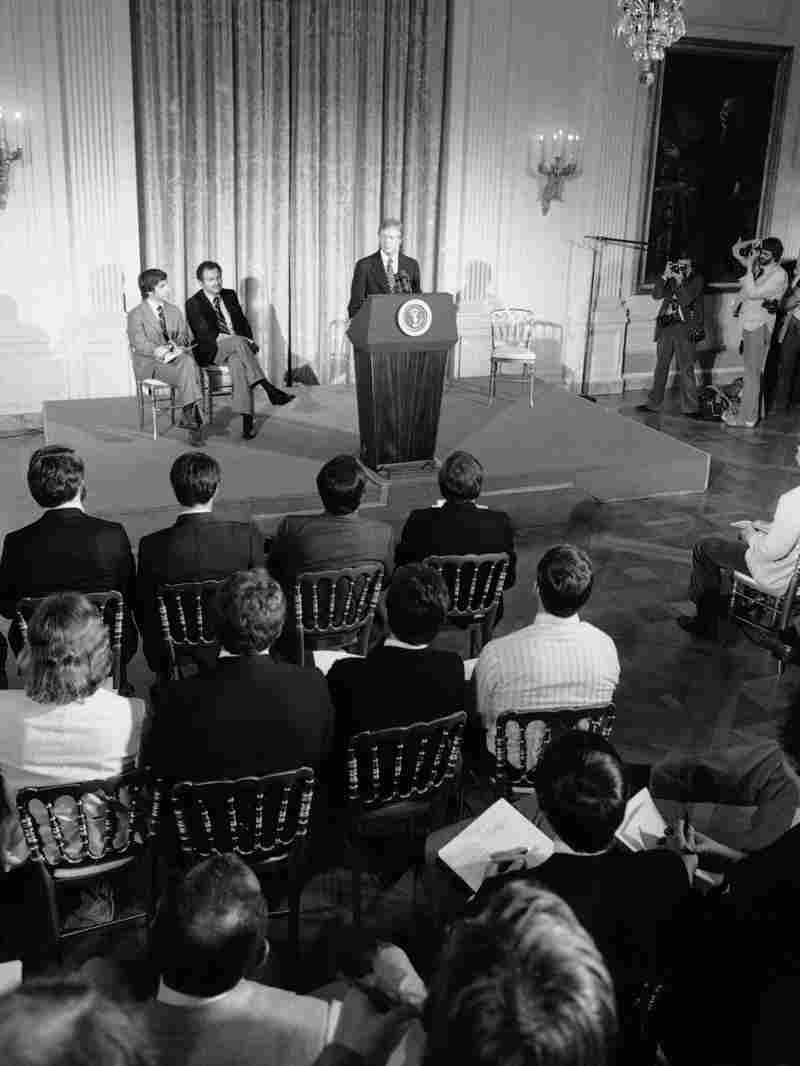 President Jimmy Carter addresses athletes at the White House who were to compete in the Moscow Summer Olympic Games on March 21, 1980. The president asked them to support his proposed boycott of the Games to punish the Soviets for their invasion of Afghanistan.

But by March of 1980, Carter was resolute when he spoke to a roomful of grim looking Olympic athletes at the White House.

“I can’t say at this moment what other nations will not go to the Summer Olympics in Moscow,” Carter said, “ours will not go.”

“I was like, why would they ever do something like that?” Beardsley said, “Don’t people care about the importance of the Olympics and what it stands for? What it means to all these athletes around the world?”

Not even a miracle would help

In early 1980, people in the U.S. cared a lot after the stirring men’s hockey victory over the Soviets at the Winter Olympics in Lake Placid.

The Adminstration worried the so-called Miracle on Ice might lessen support for a summer boycott. But intense pressure by Carter and top officials forced a bitter U.S. Olympic Committee to vote in favor.

The U.S. was the most prominent of nearly 70 nations that skipped the Games.

Beardsley kept swimming and aimed to qualify for the 1984 Olympics in Los Angeles, which the Soviets, bent on payback, would boycott. He was still training in Florida but not part of a team – he’d graduated from college in 1982. Many of his friends had moved on – back then, athletes often didn’t have the lengthy careers they do now.

“In the back of my mind, I’m thinking am I really doing the right thing [by continuing to train]?” Beardsley said. “Shouldn’t I be going out and getting a job?”

The doubts took their toll.

Beardsley failed to qualify, and he walked away from the sport.

But it wasn’t long before he returned to swimming, in a different way. In 1987, he got involved with an event that ultimately became the organization Swim Across America, which raises money for cancer research. Beardsley has stayed involved to this day, currently serving as Director of Partnerships. He says it rekindled his love for swimming and it’s helped him deal with 1980.

Beardsley said some of his teammates who were forced to boycott are still “incredibly mad.” But he’s made peace with it.

“I put it into perspective,” Beardsley said, “I didn’t have to risk my life or make a sacrifice greater than just not going to an event.”

Still, the experience remains unsettling at times. The hardest part of being on the 1980 team? In his words, “we don’t know who we are.” 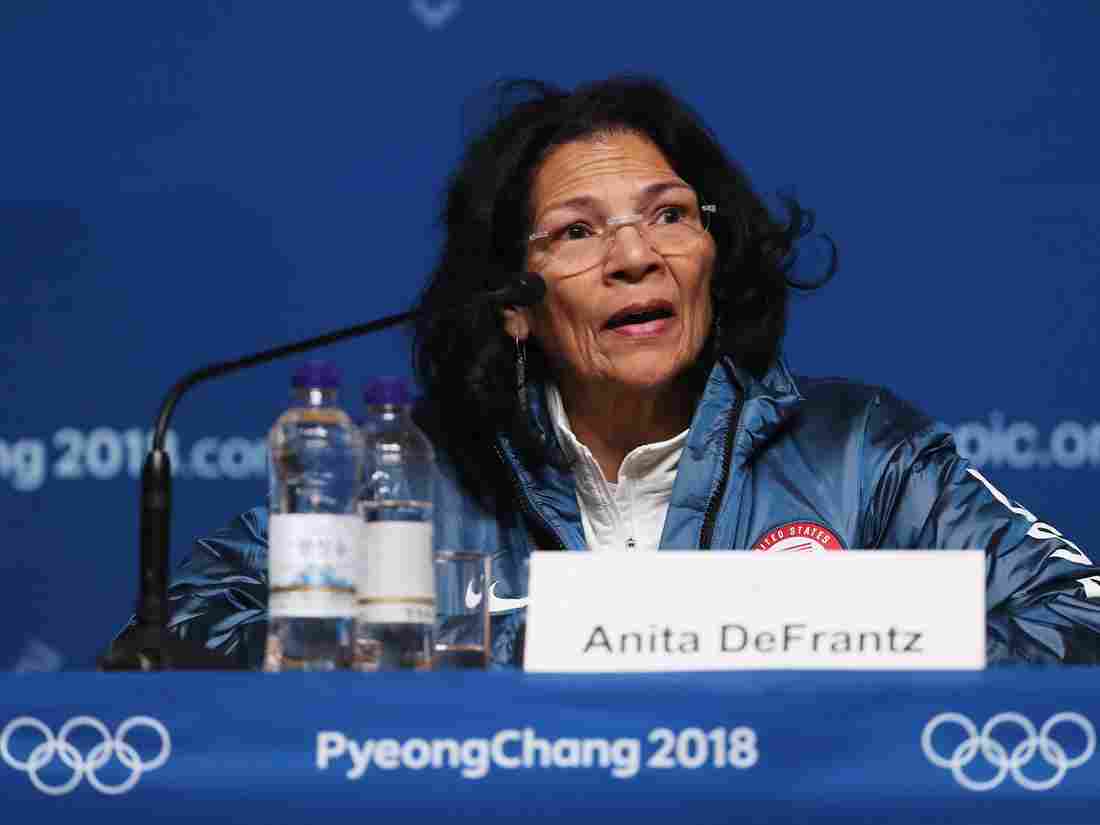 Former medal-winning rower and International Olympic Committee member Anita DeFrantz speaks to reporters at the 2018 Winter Olympics in South Korea.DeFrantz was part of the 1980 U.S. Olympic team that boycotted that year’s Moscow Summer Olympics because of the Soviet invasion of Afghanistan. DeFrantz laments the 1980 Summer Olympians were “the team with no result.”

The team with no result

That lost identity was a topic of a Zoom town hall in April for athletes who boycotted the 1980 Olympics. They discussed the boycott and also passed on advice to today’s Olympians who were dealing with similar challenges related to the 2020 Games.

Former medal-winning rower and longtime International Olympic Committee member Anita DeFrantz recalled being at a gathering where they were honoring past Olympics.

There was nothing to show for Summer 1980.

DeFrantz and other team members find it particularly galling that the boycott, in their words, didn’t save a single life. The Soviets stayed in Afghanistan until 1989. But Rita Buck-Crockett, a top volleyball player on the 1980 team, said with the coronavirus, today’s Olympians have a much different opportunity, as they deal with forces beyond their control.

“What you have to understand is,” Buck-Crockett told current athletes on the Zoom call, “you are saving lives by not going to the Olympics this year. As hard as it is, you have only one year [delay] hopefully, and you’re going to save a million lives.”

If the Tokyo Olympics begin next July, those who delayed and then competed undoubtedly will be celebrated for taking part in one of the most memorable Games in history.

In a recent letter to the athletes of the 1980 team, Sarah Hirshland, CEO of the U.S. Olympic and Paralympic Committee, wrote, “We can clearly state, you deserved better.” And she announced they’ll be part of the new USOPC Olympic museum, scheduled to open next week in Colorado Springs.

The team with no result, at least, will have a permanent tribute.