A Black man was shot in the back multiple times by police in Kenosha, Wisconsin, on Sunday, a bystander’s video showed, prompting community protests and widespread anger.

The shooting occurred just three months after the killing of George Floyd in Minneapolis police custody.

The man, identified by his family as Jacob Blake, 29, was in serious condition at Froedtert Hospital in Milwaukee, the Kenosha Police Department said in a statement. Blake’s family has since confirmed that he is out of surgery and stable.

Police released few details about what happened. They said officers were responding to a domestic incident at 5:11 p.m. and “were involved in an officer-involved shooting.” Mayor John Antaramian said Monday that there was no body camera video of the incident and that he wasn’t sure whether a dash camera recorded it.

The Kenosha Police Department said the state Justice Department’s criminal investigations division would investigate, and it referred requests for comment there.

“The Wisconsin Department of Justice is vigorously and thoroughly investigating yesterday’s officer-involved shooting in Kenosha. As with all investigations we conduct, we will unwaveringly pursue justice in this case,” state Attorney General Josh Kaul said in a statement Monday. The Kenosha County district attorney’s office will decide whether to file charges, as is customary, Kaul’s statement said.

The officers involved have been placed on administrative leave, the state Justice Department said in a statement.

Anger over the incident sparked protests across the city. Dump trucks were set on fire and windows of a public library were smashed, according to video on social media.

A reporter for NBC affiliate WTMJ of Milwaukee said the windows of police vehicles were smashed. Antaramian said an officer was also struck with a brick, adding that the officer had recovered.

The Kenosha County Sheriff’s Department declared a state of emergency late Sunday and imposed a curfew prohibiting people from being on the streets until 7 a.m. Monday. The curfew will be in effect again Monday, starting at 8 p.m. and lasting until 7 a.m. Tuesday, the department said.

Wisconsin Gov. Tony Evers said in a statement Monday that at the request of local officials, he was authorizing the National Guard to help local law enforcement respond to the protests. In what Evers called a “limited mobilization,” the troops will help protect critical infrastructure and ensure that “Kenoshians are able to assemble safely,” he said.

Antaramian tried to hold a news conference Monday with leaders of local civil rights organizations, planning to discuss Blake’s shooting and what changes are needed for the local community.

But the mayor was instead met with incensed protesters outside the Public Safety Building. Antaramian struggled to leave the building as he was crowded by the activists, and he tried to speak to them through a megaphone about a pending third-party investigation.

People in the crowd argued that the system is corrupt and demanded that the officer responsible for shooting Blake be arrested and charged. Protesters began yelling at the mayor, asking for the officer’s name.

Mayhem ensued after Antaramian tried to get inside the Public Safety Building and protesters followed, trying to block the door from being closed. A group appeared to fight with officials for several minutes at the door, which seemed to come off its hinges. Police in riot gear pepper-sprayed the protesters to keep them outside.

Blake’s family has retained civil rights lawyer Benjamin Crump, according to a statement from Crump’s office.

“Blake was helping to deescalate a domestic incident when police drew their weapons and tasered him. As he was walking away to check on his children, police fired their weapons several times into his back at point blank range. Blake’s three sons were only a few feet away and witnessed police shoot their father,” the statement said.

Get a head start on the morning’s top stories.

“We all watched the horrific video of Jacob Blake being shot in the back several times by Kenosha police. Even worse, his three sons witnessed their father collapse after being riddled with bullets. Their irresponsible, reckless, and inhumane actions nearly cost the life of a man who was simply trying to do the right thing by intervening in a domestic incident. It’s a miracle he’s still alive,” Crump said.

“We will seek justice for Jacob Blake and for his family as we demand answers from the Kenosha Police Department,” he said.

Responding to a tweet from Crump, NBA star LeBron James weighed in on the shooting, saying: “And y’all wonder why we say what we say about the Police!! Someone please tell me WTF is this???!!! Exactly another black man being targeted. This s*** is so wrong and so sad!! Feel so sorry for him, his family and OUR PEOPLE!! We want JUSTICE.”

Raysean White, 22, who recorded the video, said the incident first caught his attention when he heard a group of women arguing across the street from his apartment.

“Then the guy that got shot showed up,” White said in an interview. “He pulled up in his truck, got out his truck, seen him walk up. His son was running towards him. He was picking up his son. He told his son to get in the gray truck, we about to go.”

Minutes later, White said, he looked out his window again to see “police out there wrestling” with the man, who was later identified as Blake, behind the vehicle.

White said he saw a female officer fire the stun gun at Blake. White said he then started to record the incident, some of which is obscured by the vehicle. It is unclear what exactly happened before the video starts.

“They were also yelling, ‘Drop the knife,'” White said. “I didn’t see any weapons in his hands. He wasn’t being violent.”

The video shows Blake walking in front of the vehicle to try to get into the driver’s seat. It is not clear whether he is carrying a knife.

It is at this point that shots are fired.

“I was freaked out,” White said. “And then I seen the mother of the child that got in the truck, I seen her get the little boy out the truck. He had to be 4,5, 6 or that range.”

Blake’s partner, Laquisha Booker, told WTMJ that she and Blake have three children together, who were in the back seat when police shot their father.

“That man just literally grabbed him by his shirt and looked the other way and was just shooting him. With the kids in the back screaming. Screaming,” Booker said.

Download the NBC News app for breaking news and politics

“That don’t make sense that you treat somebody like that, who’s not armed. He ain’t throw no punch or nothing,” Booker said.

Neither the Kenosha Police Department nor the Wisconsin Justice Department immediately responded to requests for comment about the accounts described by Crump, White or Booker.

Evers and Lt. Gov. Mandela Barnes on Monday called the Legislature into a special session on policing accountability and transparency.

“On June 19, 2020, in the wake of widespread pleas for justice following the murders of Breonna Taylor and George Floyd, Gov. Evers called for the legislature to take up a series of policing accountability and transparency measures,” said a statement from the governor’s office. “As of August 24, 2020, more than 130 days since the Wisconsin State Legislature last passed a bill, the Legislature has not convened to take up the measures.”

Barnes said during a news conference Monday: “For over two months, our legislative leaders have ignored the calls for change from people in every part of our state, and now another Black man is fighting for his life due to the actions of law enforcement. The people of our state are done waiting for the Legislature to act, and so are we. We know we cannot remedy the systemic racism built into all of our systems with just this package of bills, but that does not mean we should stand still.”

Evers said Monday: “We must rise to this movement and this moment and meet it with our empathy, humanity and fierce commitment.”

He said in a statement Sunday, “While we do not have all of the details yet, what we know for certain is that he is not the first Black man or person to have been shot or injured or mercilessly killed at the hands of individuals in law enforcement in our state or our country.”

The Milwaukee Police Association said in a statement that it was “disturbed” by Evers’ comments. “Gov. Evers does not know all the facts,” the statement said. “Let investigators do their job and investigate.”

In a statement, Pete Deates, president of the Kenosha Professional Police Association, reiterated Monday that the state Justice Department was investigating.

“Until that investigation is completed, we ask that you withhold prejudgment about the incident and please let the process take place,” Deates said. “The video currently circulating does not capture all the intricacies of a highly dynamic incident. We ask that you withhold from passing judgement until all the facts are known and released.

“We, along with the citizens of the great City of Kenosha, ask for peace and to let the process play out fairly and impartially,” Deates added. 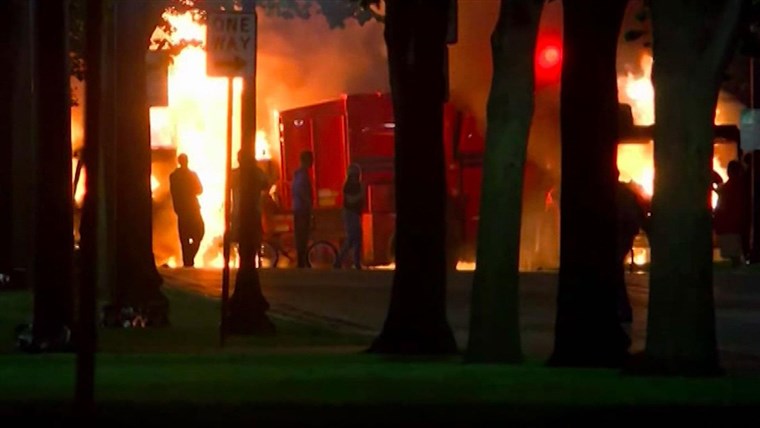 Jeffery Robinson, director of the American Civil Liberties Union’s Trone Center for Justice and Equality, said in a statement that “unfortunately, disgusting acts of police brutality like this will be commonplace so long as police continue to act as an occupying force in Black communities.”

“The fact that incidents of police violence like this, the murder of Breonna Taylor as she slept in her home, the murder of George Floyd across the street from a grocery store, the murder of Eric Garner outside of a neighborhood bodega and countless others have become commonplace shows that the very institution of American policing is rotten at its core,” Robinson said.

President Donald Trump said he was briefed about the incident early Monday and would meet with Attorney General William Barr later in the day to discuss the issue in more detail.

Although it was too early to tell what happened, Trump told reporters, “the video tells a story that’s troubling.”

In a statement, Democratic presidential nominee Joe Biden said: “This morning, the nation wakes up yet again with grief and outrage that yet another Black American is a victim of excessive force.”

“Equal justice has not been real for Black Americans and so many others. We are at an inflection point. We must dismantle systemic racism. It is the urgent task before us,” Biden said. “These shots pierce the soul of our nation. Jill and I pray for Jacob’s recovery and for his children.”